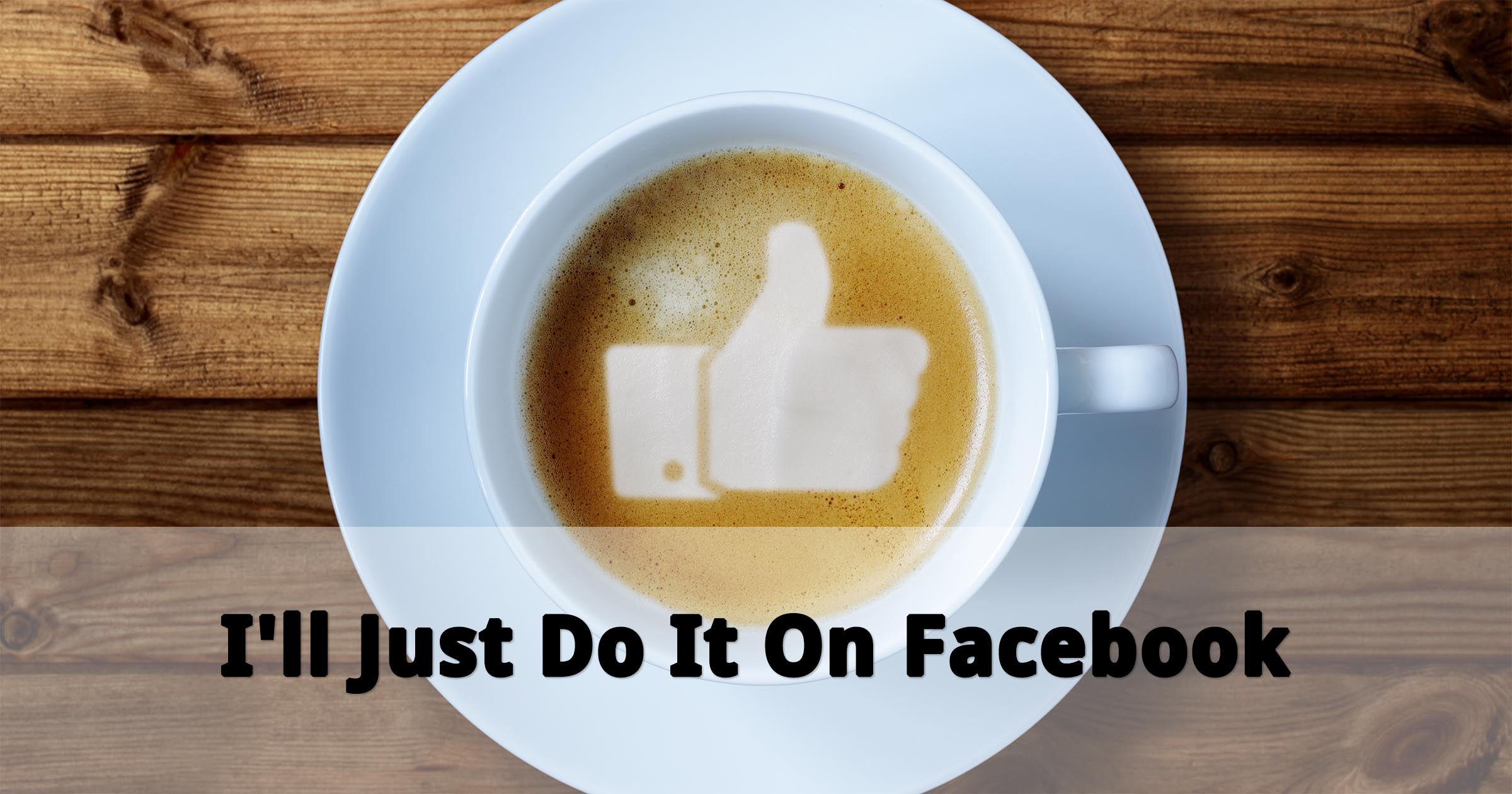 I’ll use Facebook as my example here, but this really applies to any social media service.

The lure is strong.

When we see things go viral on Facebook, Twitter, Instagram, and other social media services,  it’s tempting to think that’s where we should be putting most, perhaps even all, of our efforts.

Don’t get me wrong – social media can be an important part of a larger strategy. But it should never be the biggest part, and certainly not the only part, of such a strategy.

Let’s look at a few of the drawbacks of investing heavily in a single social media strategy and platform. (And then I’ll look at the right way to use ’em.)

Not all your people are there

As hard as it might be to believe, not everyone is on Facebook. It only seems that way. 🙂

Facebook certainly has a massive user base, and a lot of your existing or potential customers, clients, and friends are there, without a doubt; but not all of them.

By picking a social media platform like Facebook, you’re limiting yourself to only those people who happen to use it, and no one else.

Depending on your audience, there may be a high degree of overlap, or none at all. Regardless, by focusing on what seems like a popular and easy venue, you’re probably missing a significant portion of your potential audience.

They won’t see all your posts

Let’s assume for a moment your entire audience actually is on Facebook. This never happens, but for a moment, let’s pretend it’s so.

Let’s even say that all of those people actually took the step of “Liking” your Facebook page. Congratulations! You have a high number of page followers!

Even so, when you post something, it won’t reach all your people. There are two reasons for this:

Facebook simply isn’t a reliable way to consistently reach out to your audience. They’re not all there, and even those who are aren’t likely to see what you have to say.

You’re working for someone else

I’ve written before about “digital sharecropping”. To quote my earlier post,

When you post on a social media service, it’s critical to remember that this is not your “land”. The service, and everything on it, ultimately belongs to the service provider. You are but a “tenant”, posting and sharing with the hopes of receiving some share of the attention of other users of the service.

By engaging with your people on Facebook, you’re building Facebook’s business.

By bringing your people to Facebook, you’re building Facebook’s business.

Wouldn’t you rather invest in your own business rather than theirs?

It could all disappear overnight

If you get it back (and it really is a big “if” for most people – I see accounts lost forever on a regular basis), you return to find that you’re no longer the owner of your fan page. Or if you are, that fan page was used to spam your followers to the point where there was a mass exodus and your follower count has been cut in half.

All your hard work – for nothing.

Another scenario: Facebook changes the rules (they’re allowed to do that, you know). All of a sudden, whatever it is you’re doing is against their policies. Or your posts are being shown to even fewer people.

All your hard work – for next to nothing.

Yet another scenario: it’s five years from now, and the masses have moved on, away from Facebook and onto whatever’s next. Facebook has become the new MySpace.

You get the idea. You don’t control your own destiny when you pin your hopes and efforts on someone else’s platform, be it Facebook, Twitter, Instagram, or any of a hundred other social media services.

How to use social media safely

Despite all that, social media can and even should be a part of your overall strategy for reaching out and connecting with existing and new people. The trick is to do it safely.

This may sound kind of brutal, but keep it in mind; it’s the bottom line to using social media effectively and safely.

The goal of social media is to bring people back to your web site.

How do you do that? By adding value and giving them a legitimate reason to come visit you.

No, that doesn’t mean every post needs to be a link to your site. It means that after seeing the value you offer, people have a reason to visit. Then, yes, if some of your posts happen to link back to your site, that’s perfect.

But, as always, focus on value, not gratuitous clicks. There are enough click-bait sites doing that already. Don’t be like them.

Then, when people visit your site …  offer up more value. Give them an opportunity to see more of what you have to offer.

And, of course, give them the opportunity to subscribe to your mailing list. Your mailing list is probably your most valuable asset – and it’s yours. It’s what you keep no matter what happens. It’s how you reach out to all the people that actually asked to be on it.