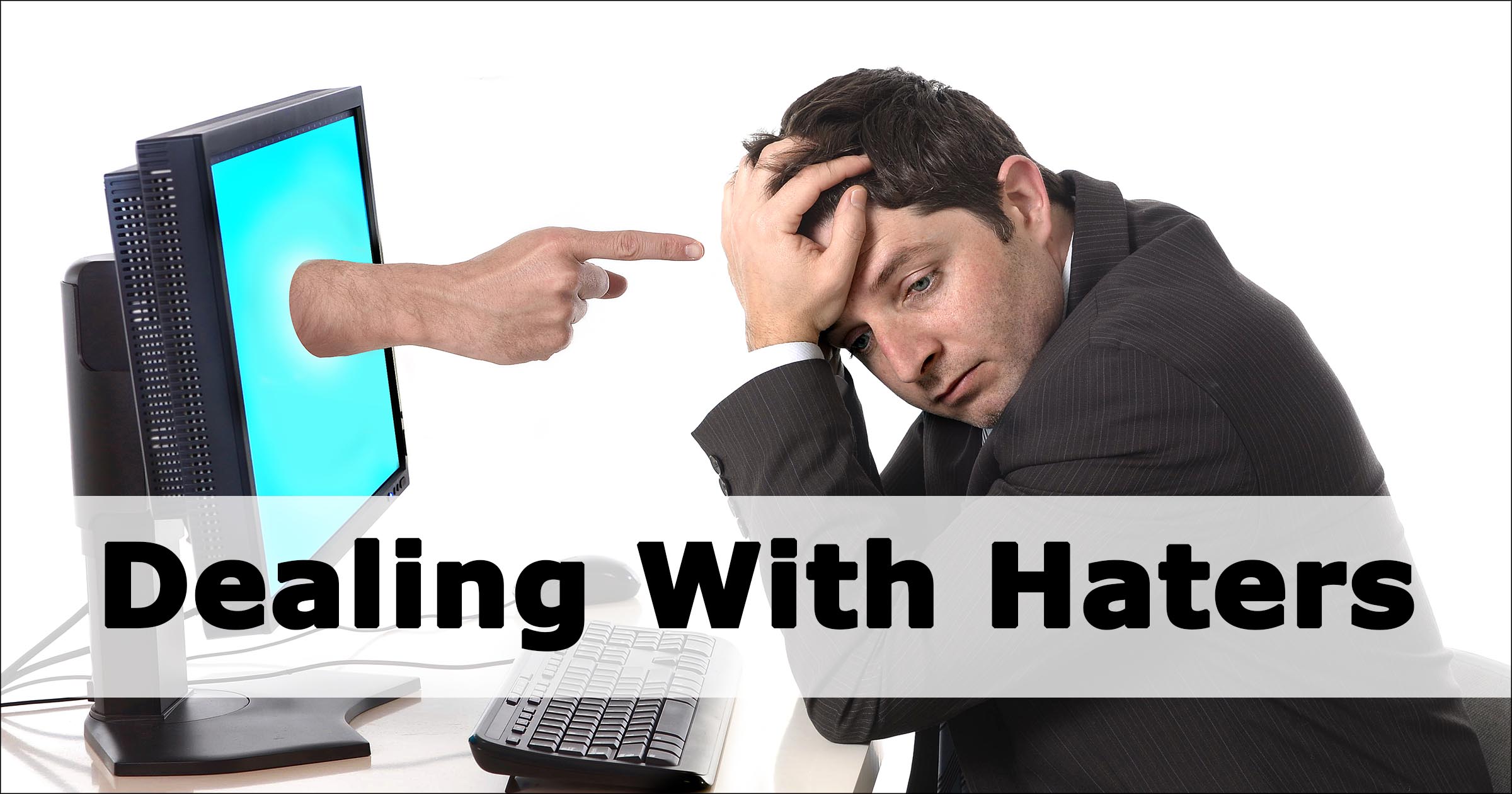 “You’re just a shill for Microsoft!”

“How much is Bill Gates paying you to spout this crap??!?!?”

Those comments, and much worse, began arriving when I started publishing online. They came as comments on articles, accompanying “questions”, or via direct email.

I’ll admit, these are somewhat out of the ordinary, but only in that the spelling and grammar is correct. The vast majority are not. But what they all share is an unbridled enthusiasm for telling me what an awful job I’m doing, and how wrong I’m getting it.

Here’s the bad news: it’s likely to happen to you too, to some degree. In fact, if you’re wildly successful, you’ll get a bunch of it.

And yes, there’s irony in that.

Haters and trolls and more

I don’t let it depress me any more, but at first it sure did. Some people didn’t like me! Why? Here I am, pouring out my heart, handing out my technical expertise for free, and some folks didn’t just disagree, they got downright nasty about it!

There are a bunch of theories why haters and trolls exist. Some may be frustrated with their own lack of success. Some may have actual psychological problems. For some, abusive communication might even seem the normal and appropriate way to communicate.

Some are simply angry, and choose the nearest target.

When you think about it, there’s no shortage of anger when it comes to technology, and I’m a pretty easy target, especially if I have to deliver bad news like “sorry, but your files are all gone forever”.

The fact is, it really doesn’t matter why haters exist.

What does matter is that you simply realize that they do, and prepare yourself for what I can only call inevitable.

Unfortunately, building a thick skin is an important part of publishing online today, no matter what it is you publish, or where.

Here are three strategies to help.

1: Remember: it’s not about you, it’s about them

It may be directed at you, but the more over-the-top feedback is, the more it’s really about them and not you.

Think about that for a moment. The more abusive or inappropriate a comment about your work is, the less it’s likely it is to actually have anything to do with you.

You can choose to feel sorry for them, or to feel nothing at all, but the one thing you needn’t feel is bad about yourself.

It’s not about you.

It’s oh-so-tempting to engage when challenged – to defend yourself against inappropriate and incorrect accusations or language.

Don’t. Just … don’t. It’s a battle you can’t win. In fact, it’s a battle that can really only make things worse, particularly if it’s happening in a public venue like a comment stream.

Trolls are simply not worth responding to. If they leave abusive comments, delete ’em. You’ll be doing your other readers – your real audience – a favor by removing inappropriate content that adds no value.

One approach I take is to publish on venues that allow me to set expectations and have some semblance of control.

On my own web site, all comments are read and moderated; the same goes on my Facebook page. In either venue, if something’s inappropriate, I have no hesitation removing it. I don’t remove disagreement, but I do remove abuse – especially abuse of other readers.

On the other hand, while I publish videos on YouTube, I completely disable comments there. YouTube, today, remains a cesspool of trolls and their ilk, and I – and my readers – simply don’t need that. Instead, in my videos I direct people to pages on my website where they can comment. I use the fact that I moderate comments as a selling point.

When people unsubscribe from my newsletter, they’re given the opportunity to leave a comment. After reading them religiously for years, I finally stopped. Not only were many of the comments not items I could act on, some were borderline abusive. I don’t need that. (And, for the record, never ever take an unsubscribe personally. It will happen, for a variety of reasons, and that’s okay.)

Thick skin is an asset

That’s not to say I never look at negative feedback, and I’m certainly not suggesting you do that. Disagreement and negative feedback can be incredibly valuable, if it’s presented respectfully.

And, I have to say, the vast majority of feedback that does disagree with me is presented in a way that is totally appropriate and frequently very valuable.

They say it takes something like ten or twelve pieces of positive reinforcement to overcome one negative one. Building up that thick skin, and realizing that negative feedback (sometimes extreme and even inappropriate negative feedback) is inevitable, actually makes it easier to more rationally deal with it all.

I learn a lot from the people who disagree with me, and I’d recommend you remain open to that possibility as well. I’m the first to admit that I don’t know everything, and I believe that’s true for any “expert”. The more “expert” you are, the more you know, the more you realize you don’t know, and the more open you are to understanding that.

Discarding the haters, and listening to more rational feedback – even interacting publicly with it – is a way to learn, a way to grow, a way to show that you’re open minded, and above all, it’s one more way to add value.

I’ve come to love the people who disagree with me.

I not only try to learn from them, but I often use their comments as a way to add value to my readers. Not only do I encourage discussion in the comments on Ask Leo! articles, but I make a point of highlighting comments that rationally and respectfully present a viewpoint different than my own.

And the abusive ones? I choose to see their presence as a measure of my success – just before I otherwise ignore or delete them, of course.

Not only am I OK with that, but it means I get to say something that might otherwise be taken completely inappropriately by itself:

May you have plenty of haters.

This isn’t about me.

This is about you, your website, and what you should expect.

I absolutely do appreciate the comments of support for what I do (always, any time, anywhere 🙂 ), but as you can see by what I’ve written above, I’ve quite reconciled myself to the reality of haters.

This is about you being prepared when you inevitably (even hopefully?) get haters on your website.

21 comments on “Dealing With Haters”

Dedicated to the premise that anyone doing business, anyone with a cause to champion, or anyone with a message to share needs to have a presence on the web.

Ask Leo on Business will show you how; step-by-step, all in the clear, plain English that Ask Leo!‘s Leo Notenboom has become known for.

Get Ask Leo! On Business by Email

Get Ask Leo! On Business in your inbox each week as I publish new articles.

Also available as an RSS feed, including podcast.